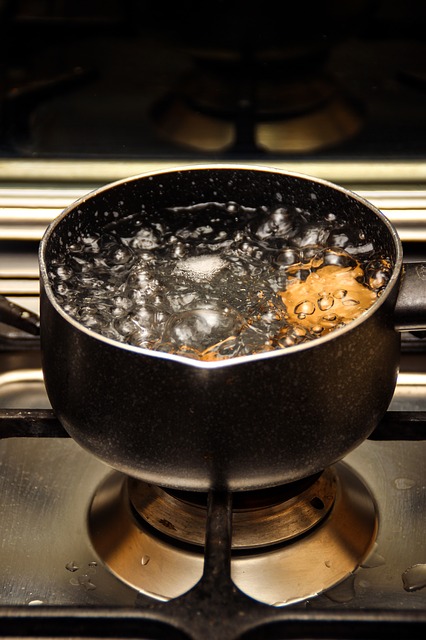 In last month’s post on Perfect Poached Eggs you caught a glimpse of my favourite pan lid ever!

I have to admit that some people did ask me about it (well just my mum 😁) so I thought I would write a recommendation post about it so you could all appreciate how great it is.

Disclaimer: This post contains affiliate links to products. I may receive a commission for purchases made through these links. I like these products and would definitely recommend them to you. Ian Wilson is a participant in the Amazon Services LLC Associates Program, an affiliate advertising program designed to provide a means for sites to earn advertising fees by advertising and linking to amazon.com

As I have got older I have started to become forgetful. Couple this with my character flaw that I am easily distracted means that I often leave pans on the cooker boiling away while I go off and do something completely different.

When I was younger we had a milk pan in the kitchen. It appeared to be like my younger self, that the only thing you were allowed to put in this pan was milk. I’m sure someone once said that it was a thick bottomed pan, that was perfect for boiling milk in. Even when the handle fell off the pan, it had earned its appreciation within the kitchen to be continual used, with a camping handle!

However, I digress! If the milk pan was left unattended then it would frequently boil over, caking the cooker hotplates with milk that quickly burnt and turned brown. This was when it become difficult to clean the cooker as it often required heavy hacking to scrape the burnt milk off that had resulted from the boil-over!

But now, I don’t have to worry about pans boiling over since my silicon pan cover prevents this!

So the silicon pan cover is not much to look at. It is washable and flexible and the size that I have covers almost every pan size!

As well as being useful to just cover anything that is waiting to be served out of the pan, I use it to support the boiling process. This means that the pan contents boil quicker and in doing so, use less energy. That is ultimately better for the environment.

But the incredible aspect of this pan cover is the little flower attachment on the centre of the cover. This little flower actually prevents any pan from boiling over!

As it does boil, the water comes up through the vents and just simmers on the top of the pan cover. You can either then reduce the heat so that it doesn’t simmer through the flower, or just leave it.

I must admit that without the boiling over the signal of sizzling water as it hits the hot plate, I’ve had to now set a timer to remind me to go back to the pan and deal with my boiling food.

This pan lid has served me so well that I would buy multiples if I ever had the need for several pans boiling at the same time on the cooker. Because I am always cooking for one there is usually just one pan going, so one lid is sufficient. Due to the size of the silicon pan lid, I don’t need several lids for all the different size pans. It’s one size fits all!

Let me know in the comments below if you have something similar and I would love to see your own silicon pan lids in action if you decide to buy one!