I actually had this book in my audible library for sometime before I actually got round to listening to it. It was only after my brother commented what a good book it was that I started to listen to it. I have to say that I have not seen the film and I do wonder whether it will do the book justice. But, without further ado, lets head off to the red planet and see what I thought of the book… 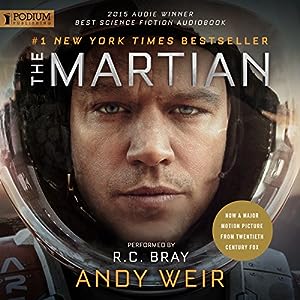 When rating audiobooks, I have some criteria in order to evaluate the book. These are as follows ;

The Martian a book about an astronaut, Mark Watney who gets left behind, presumed dead, after a expedition to Mars has to suddenly leave. The story follows his exploits as he tries to survive the harsh environment of the red planet, dealing with virtually no atmosphere, no food or water and no form of communication or real hope for a rescue. The book details his thought processes and the actual science as he solves, survives and copes with a variety of problems and situations which are thrown at him by the planet with one focused aim – to survive until he is rescued.