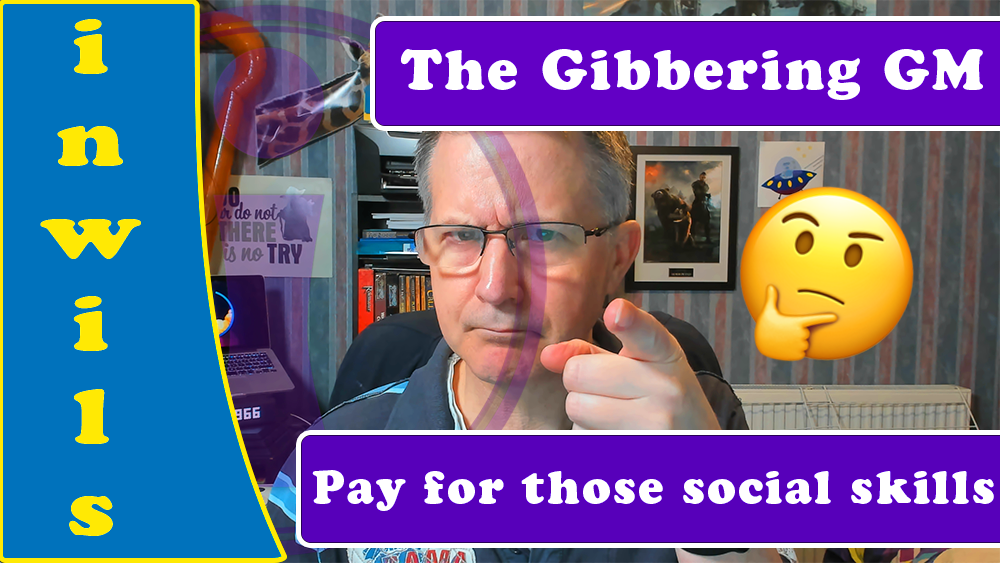 Have you read…
Get the skills rather than RPing!
Out at Sea!
Where it all started!
Time to be sponsored!

But I do have an issue with this narrative which does when it happens, gets me slightly ‘hot under the collar’. What is that?

Well, when people use their own role-playing skills instead of using their character skills!

Whenever you create a character you are faced with a multitude of choices. Once the race and class as been decided, there are usually skills to select or to put points into.

Within Mythras, you allocate points which are percent points, to a range a skills which are decided upon due to your cultural and professional background. These skills as split into standard skills – ones that everyone has – and professional skills – those which you get from choosing a profession invest time into.

Although the process set out above is specifically for Mythras most RPG systems have something similar. What is also similar is that you never have enough points to be fantastic at everything. Indeed it is often true that you never usually have enough points to be an expert in all the skills you want! Compromises have to be made and you end up with either an overall average character or, a character which is not so good in some areas, but a lot better in other.

The important aspect of the choice of skills is that they all should have some use within the games and campaign. If not, then the players feel that their investment of points has been, well, pointless.

Investing skill points into social skills is something, as a player, I really like to do. However has a GM I do notice that sometimes player use their own skill within social encounters rather than those of the character.

As a GM, I am happy to have players with a lot of experience with role-playing through some to hardly any. In fact I really like a mixture. In this way, not only do I see the campaign and the characters develop, but I also get to see the players develop as role-players as well.

Every player brings something different to the virtual table. Some might be there to demonstrate their prowess with a blade, while others might want to be the silent type who lurks in the corner and only springs into action when the going gets tough. Some are the fighters some are the merchants and some really like to role play.

This last group of players are the ones who like to act, change voices and are always at the front of the group ready to engage with anything from haggling for some rations to trying to extract some important information from the local guards. I myself, would always be one of these players. I love the interaction and I think this is probably why I enjoy GMing so much. I can create NPCs for the players to engage with and flex my role playing muscles

But does that mean that only the players who enjoy or excel at the actual role playing should have the social skills? Well, of course not! A player who doesn’t really like to interact with others could still play the social character. They character can have the skills and so it is up to the GM to make it happen. We don’t expect the players who have a fighting character to actually be proficient themselves with a weapon and we certainly don’t expect the spell casters to be proficient in spells. However, what I don’t actually like, is when the player who is good at acting, actually expects their own skills as a player to be transferred to their character!

You want it? Pay for it!

Before we go any further I want to make something clear. I don’t expect everyone to have an influence or bargaining skill to talk to NPCs! Not at all. Anyone can talk and role-play to anyone else. But if they are using a social interaction to gain something then a skill has to be rolled! And, if the player has not invested points into the social skills then they are going to be bad at the skill, despite of their aptitude for role-playing and acting.

For those players who have invested points into the social skills they can have two approaches to rolling the skill. They can do a bit of role play, and then roll their skill or they can tell me what they want their character to try and achieve and then roll their skill. In this way, the actual player can be a complete non-acting introvert, but can still play the social face type character. But the reverse is also true. If the player is a great role player I don’t think they should be able to just role play and not actually roll a skill in order to get the information. Plus, even if they role-play wonderfully, that should not impact on the actual skill roll. The two are completely separate and should never influence each other.

So, basically, in a concise sentence – if you want to use social skills like influence, invest points into them and never go down the road of thinking that you can put your points somewhere else and then rely on your own acting skills to get your character in and out of social situations! You want those social skills, you pay your dues for them!

RPGs have been part of my life for a considerable time and I really enjoy sharing my thoughts with you and hearing what you think about them. Are you someone who separates the character and the player’s skills? Or do you let the two combine together?

As always do let me know in the comments below.

Until next time, stay safe and remember to always to ‘Stay Positive’.