Last night I watched the film – “The Immortal Instruments -City of Bones”. Did I enjoy it? Well… 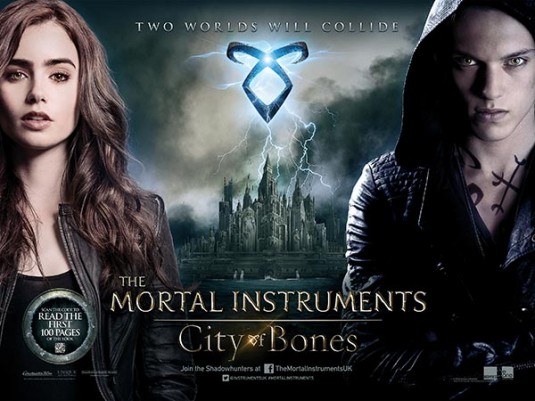 You will probably be aware that I don’t actually read a lot of fiction books any more, preferring to listen to them as I walk to work. When choosing titles from Audible to download I am always careful to ensure that I have the unabridged version of the book. As well as wanting to listen to the whole story, I also like to go to Smiths and pick the book off the shelf and see if it is actually find the part of the book that I am currently listening to. What I am beginning to find when watching films that I have previously listen to, is that it is like an abridged version of the book. Often there appears to be important pieces of information missing within the film (probably the editors’/producers’ choice) or situations within the book are explained in much more depth. I do like the way that settings come to life on the screen, although characters often can be very different to what I had previously imagined. So did I enjoy the film?

It was good – which is a general comment – I might watch it again. Generally the more times I watch a film the better it is…who could ever get bored of Aliens! The storyline is, since it is from the book, good – although I was hoping for more fighting scenes. I really like watching martial art films when the fighting is true choreography and, although the film did have some good scenes in, some of the fighting appeared to be played back at a faster speed or was so tight on the frame, that it was difficult to see the true skill of the shadow hunters.

If you haven’t seen it yet and you like this genre, then its a good film to spend the evening watching when you have nothing else to do – but if Aliens is on…go for that 🙂 or…even better…read/listen to the book.

In this episode… This week in the Call of Cthulhu session… As the investigators leave the massacre in the village, they head by sleigh to the Gypsy Camp next to Darkmere. But when they arrive they discover that not all is well there either. Soon, rifles are drawn and heroic actions are called for and…

As you might be aware, I do a number of radio shows throughout the week from my internet radio site – The Wilson Waffling Radio Station – catchy name or what! As well as these shows, I also present a show on the university radio station (Radio YSJ) and part of this show involves a…

I couldn’t resist! I remember reading something that basically said, in order to grow your Twitch channel, Facebook page or Youtube channel you had to pay money! Yes, you have seen them as well, that Facebook Promotion advert- ‘Other people are boosting this post and are getting millions of likes – why don’t you!’. Well…

In an attempt to have something ‘constructive’ to do on an evening rather than just filling the time with work, I thought I would have a go at Neverwinter on the PC. With OBS set up, it seemed a perfect opportunity to start my streaming career …

So you wanna be a DM? I have the pleasure of being a DM/GM for most the games I play, only ever playing a few times throughout my role playing ‘career’. I do wonder why I have taken this role on and it was while I was thinking about this that I suddenly realise that…

Let’s get something straight right from the start of the this blog post. I’m not a religious person and anything that I talk about today is not referring to the religious aspects of the holiday celebrations. Now that that is established (always seems strange when you actually use the same word twice next to each other) I wanted to talk about Easter. Currently we are enjoying the four day break which is the Easter weekend. Today, although it is Saturday, many of us have been confused into thinking that it is already Sunday due to having Friday off work. However, when you look and compare the Easter holidays and the Christmas holidays they have many things in common and yet, they are completely different. Is Easter slowly disappearing as a holiday celebration? Well that is what this waffle is about…