As part of my work on developing the new servers, I’ve been thinking about the spawn areas. A quick Google search identified a range of really creative builds! However, being probably the least creative person on the planet, I had to take a rather different approach… 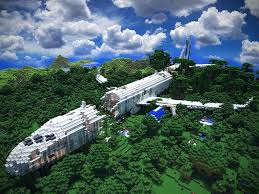 My favourite spawn area build has to be the crashed plane! I did try and make several attempts at making something similar but ended up sticking to a simple ‘greenhouse’. If you do watch the whole video, you might notice that the ‘water’ side of the build gets created and then changed to just a fish’s tail. The first attempt was mean to be a Killer Whale, surfacing up through the waves! – I know – stick to the tail…

The video speeds up after a while and then at the end there is a slower view of the finished build. As it says in the annotations – I somehow made a mess of the importing to Premiere Pro so the ‘size’ alters in the middle of the build. If you are interested in playing on the server then please just complete the application form on the website.