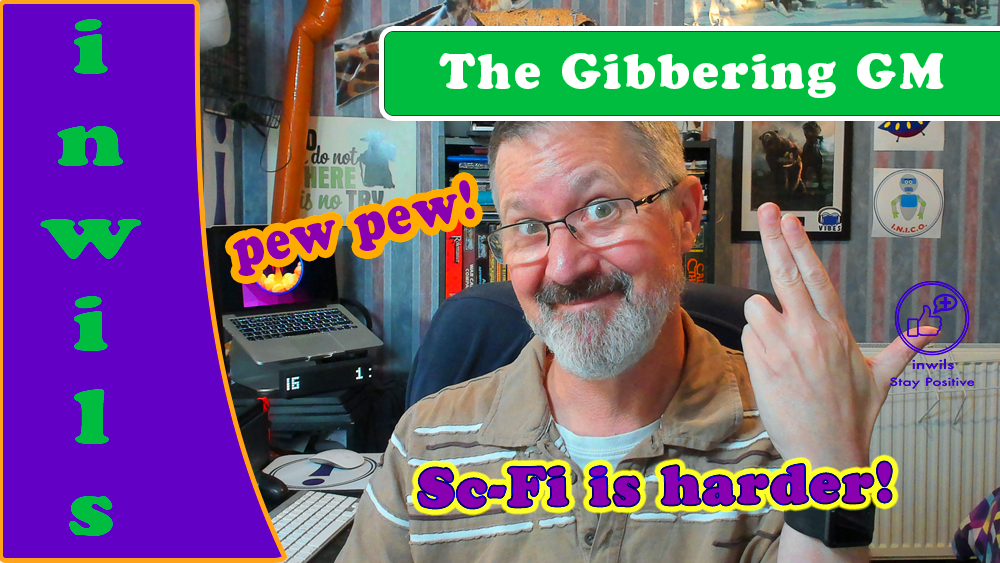 You might be aware that we have decided to swap between two settings in our regular Saturday evening RPG session. For one complete adventure, we play Mythras in the fantasy setting and then we swap to M-Space for an adventure. These swaps allow us to continue to play on a regular basis without learning new rules. It also allows the players to change ‘roles’ in the game. For example player, the healer/buffer in one game and then the hard-hitting combat expect in the other.

I am really enjoying both campaigns but there is one thing that I have noticed. It is much harder to GM a sci-fi campaign!

The variety of locations.

When I start to create a series of adventures one of the first elements that I establish is there where. Within any fantasy setting, there is a number of ‘places’ an encounter can occur. These can range from the haunted crypt to the kobold infested mines. Although there are numerous possible locations they are actually limited to a planet or continent. However, with a sci-fi campaign, the possible range of locations is HUGE.

As well as all the fantasy-based locations in any sci-fi campaign the GM has the whole solar system and beyond at their fingertips. Initially, there are the ground-based locations, starports, nightclubs and office apartment buildings and with a flick of the light speed button or hyperdrive, the party can be in outer space, cruising the trade routes! Here they can come across derelict starships, abandoned moons and even yet undiscovered space creatures. Whole adventure sessions can take place on their own starship, repelling intruders or chasing down pirates. And this is without even touching on different planets!

Within the fantasy setting, the adventures are generally based on a single continent. Although it is possible to change biomes from the lush temperature forest to the frozen arctic or water-starved desert, it is not usual to do this. Within the sci-fi campaign, the party can visit different planets that are completely covered in deserts or a frozen landscape. But other factors can change as well. The gravity can be increased or decreased or the atmosphere can be altered – both impacting hugely on the gameplay. Firing blasters or automatic pistols in zero gravity while wearing full-body suits with breathable apparatus can really heighten the need to avoid those hits!

But as well as the different locations, technology can also have a massive impact on the game and the players actions.

The Ease of Technology

There is something quite nerve-wracking suddenly being plunged into darkness within a dungeon. The party might be huddled around their campfire, torches or lanterns not being able to see what is lurking beyond in the darkness. Yes, there might be demi-humans in the party with their ultra and dark vision, one of the reasons I have never been keen on races other than humans!, but it can still be unnerving. When you step into the sci-fi campaign things change immensely. Technology has a huge part to play in the game and although this might allow some actions and/or situations to be a lot easier, it also makes them harder and I think, more enjoyable!

The classic case is communications. Within the fantasy setting, the party might have to whisper or rely on hand signals to coordinate attacks or communicate messages. Technology allows for dermal communications and even, if your campaign allows it, psionics! Satellite imagery and sensors will allow maps of almost every location to be gathered before investigation and chasms with a broken bridge do not provide an obstacle for the adventurer with a jet pack!

But with ease comes issues as well! Everything the party can do, the opposing forces can do as well. Travelling to the location mentioned by the patron might be easy with a hovercar, but tracing and targeting that car with missiles can also be easy. Coupled with the fact that the missile could be launched from miles away or even orbit increases the threat! Party members will start to explore ways to prevent detection, avoid sensors or even avoid being blown up by using flares and decoys!

Technology can make certain actions much easier and less than an issue, but it can also make the campaign world much more dangerous and, especially for me, more enjoyable.

As players and GMs move from a fantasy setting to that of sci-fi there is a very steep learning curve to engage with as to actions that characters can do or want to do. As a GM of our sci-fi campaign, I find that my mind is too often in a fantasy setting rather than a setting that is filled with technology. I think it is easier to think back to what life would be like without our current level of tech, but to think forward, is much more of a challenge.

In order to demonstrate this, let’s take the actions involved in gathering information for the adventure, what I like to call, the legwork phase. Within the fantasy setting gathering information is mainly done via social interactions or, in some cases, long nights gathering information from a dusty library. In the sci-fi campaign, as well as all the social interactions, the wonders of the internet are at your character’s disposal! News networks, media sites, private web pages and even company intranets can be infiltrated and hacked. Following a person down the streets can be done via that streetwise skill or, in the sci-fi campaign, a drone flying high, via tracers and bugs or even by encouraging the person to digest some form of radioactive element!

In order to adjust actions you do, as a player, need to think outside the box and challenge the GM and the world in order to see what the limits actually are! As a GM, I love the feeling of having to think on my feet. How will the party know of the radioactive element? Can they manufacture it? Is it legal? Can they purchase it? These are the questions that fly through my head in an instance before deciding on some sort of ‘rule’ in order to implement the procedure. I really do love it!

The more I GM a sci-fi campaign the more I am enjoying it. It definitely requires you to think on your feet and actually be able to make realistic decisions. I would definitely recommend that you have a secure understanding of the tech level of your world and how things are going to work before you embark. You don’t need to plan everything but having a basis allows you to make all decisions based on this.

If you ever get the opportunity to run or play in a sci-fi campaign definitely give it a go! It is really enjoyable and requires a different set of skills from GMing a fantasy campaign.

Until next time, have fun and happy blaster firing!