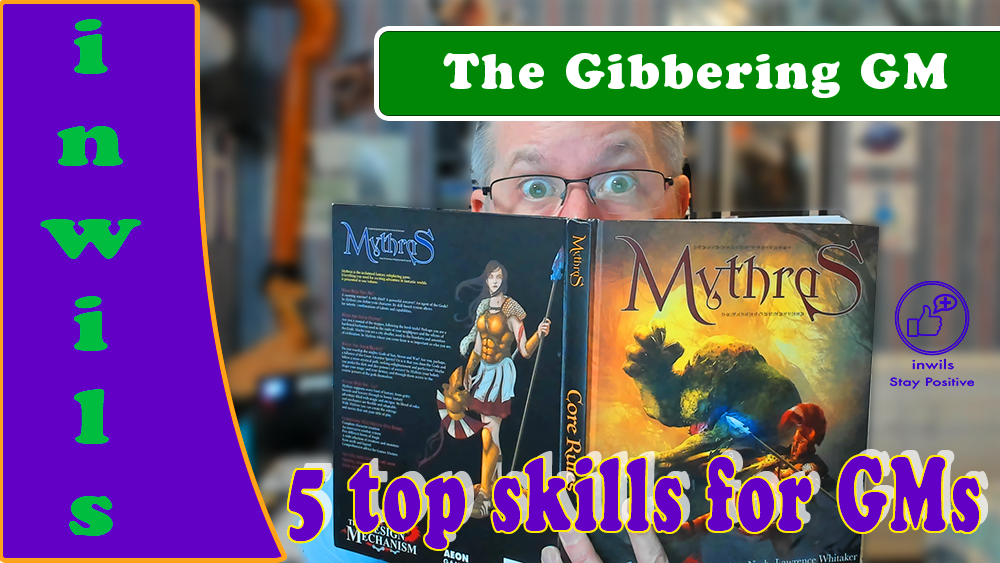 Have you ever wondered whether you have the skills, personality and or ability to become an effective games master? Do you have the skills that will allow you as the GM to create and deliver a fantastic campaign? Do your players enjoy and look forward to playing in?

Hello and welcome back to another video in my Gibbering GM series. Being a GM since the age of 14 until now – well let’s not mention how old I am ( genie 55!) – I have been on a very interesting journey. I have had my share of great campaigns, memorable characters and NPCs, and sessions to this day. I remember fondly, to the awkward players, adventures that have crashed and burned big time. Also those moments when my well of ideas for adventures has been completely dry and I have suffered from writers/creators block.

Throughout all these times, I have always been the person who would eagerly raise his hand and agree to be the GM for the new game or adventuring group.

Along my journey I have come to the conclusion that GMs have to have five personal skills that allow them to create and deliver adventures and effective campaigns. I’m not referring to skills such as knowledge of the rules, but more personal skills that I think you should concentrate on nurturing as a GM since their will definitely support you along your journey to becoming an effective GM.

Remember if you have found this or any videos on my channel supportive then please consider liking, commenting and subscribing to the channel and while you are down there, why not press that bell button so you receive a notification when I release a new video. And do stay tuned to the end of the video when I will be sharing a bonus skill that can be super helpful to any GM

With all that out the way, let’s get going with those top 5 skills

Being a GM – I spend a lot of time immersed in my own thoughts. The end of the sessions usually leaves me with a number of ideas, actions and rules that I need to look up and develop as well as the next part of the scenario. It’s not an easy role to maintain so one thing that you need to be is passionate and motivated. You need to have that drive to stay in touch with your campaign, characters and NPCs and always be on the lookout for new ideas and campaign development.

I frequently develop the campaign while walking to work and I have been woken up in the middle of the night with a great idea that I have scrabbled for my iPad to make a note of since I have learnt that I will have forgotten it by the morning. I really enjoy being a GM and that helps me to stay motivated. There are times when I might be flagging and having a great group of sympathetic players is essential. They understand that there are times that I might need a break for a week to recharge!

When I first started on my journey to an effective GM – back when we were playing Advanced D&D – I had numerous folders holding a range of sheets of paper with dungeons, NPCs and ideas on them. I actually had one folder full of a multiple levelled dungeon that I created including maps and room contents.

The number of times players mention something to me or I need to know the NPC who owns the land north of Lindowe and, without my organisation system, I had forgotten or had to start searching through endless sheets of paper! With my current organisation method, everything is at my fingertips and I can quickly locate it and share. This really supports the narrative and flow of your sessions as well as less stressful adventure creation! Happy to show you how I use World Anvil for this if it would be supportive – just pop it in the comments below.

I have been trying to create a GM video for some time now, called ‘who’s the world is it anyway!’. There was a time that I thought that the players should be honoured to play in my campaign – I know – I was very egocentric and was filled with self-importance!

Now I subscribe to a more co-creation method for the campaign. I have ideas and my players have ideas and we work together to create the adventure. However, often you have to maintain the feel or atmosphere of the campaign that would require you to take a stand!

For me, I try to be flexible as much as possible. Being quite stubborn as a person (or is that really motivation and/or personal drive!) I often have to bend like a blade of grass when playing sessions or creating the campaign. As GM, need to reach a compromise a lot of the time in order to support both the players and campaign. It is important to be flexible with the rules of your system. I am all about the narrative and the heroic feel of the campaign. I openly admit that sometimes I have been creative or flexible with the rules in order to maintain the feel of the campaign.

Only two more to go, so thanks for sticking with me!

I’ve put these two together, although they could have been kept separate. These skills really apply to the actual gaming session. Whenever an encounter happens there are usually a lot of people doing a lot of things.

Characters might be doing anything from charging into combat, casting spells or slipping into the shadows. At the same time, the mobs might be doing all of the above plus a number of other actions. As well as the actions there are the stats to deal with.

Within Mythras, the ruleset I GM, there are actions points, magic points, levels of fatigue, armour location, and this is possibly my favourite aspect of the game, combat specials! I’m sure other systems have the same number of variables that the GM has to keep track of. As well as this, there are the queries from the players, the narrative of the combat and maintaining an overview of the rules. This requires you to multi-task to the nth degree as well as maintain a calm persona! It’s not easy and I have to admit that I still do drop one of the several balls I am juggling during combat. I also try to keep that well-known phrase in my head – keep calm and carry on

And finally, probably the most important skill to have is the ability to keep positive, have fun and laugh!

I really can’t stress this enough. If you are not enjoying it and not laughing throughout every session then give the job up. Not because you are no good but because it is meant to be fun to GM and play. Even when everything is going to pot and the players have decided to go off on a completely different track or a lucky roll has demolished that demon boss that you were hoping would provide the party with combat to remember for a lifetime – smile laugh and stay positive.

With all the above skills in action, I admit that when things go differently, my mind jobs into hyperdrive and I am considering other possible encounters for the group. I think staying positive really helps when players are challenging decisions or suggesting other rules. Frequently I just say that we will go for it and decide later via a discussion the final decision over the rule of action. Of course, having the email of the game’s creators does give me the option to check with the creators! But, if you get to the end of the session and your face isn’t sore from laughing or you just think – wow! then you might need a new group of players and/or campaign.

Becoming an effective GM takes time and experience. I have done the role for some time now, but still, openly confess that I am still learning and developing. There are plenty of GM streaming their games to do spend some time watching and learning how to develop in your role and I hope what I have spoken about in this video has been helpful.

If you agree with any of the skills I have mentioned or you have any of your own skills that you think should have made my top 5 then do let me know in the comments below.

Just before I go – what about that bonus skill? Well, this is not applicable for all GMs but I would recommend the ability to delegate. GMs are busy people, not only with the campaign worlds but also with their real-life commitments. Sometimes we have had to recognise that we have too much on and, rather than creating something delegate it to the player or players. This allows them to come up with ideas that you can include in your campaign. This also means that the player can feel valued.

And that’s it, another Gibbering GM video coming to a close. Remember don’t forget to like comment and subscribe – this really supports me and the channel so huge thanks!

Until next time, hope all your rolls are successful and that bards create songs about your campaign for years to come.

This is the Gibbering GM returning to his campaign – cya, bye!